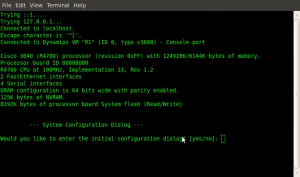 I recently got my hands on a few Cisco 1760 routers to make up part of a frame relay CCNP lab, unfortunately when reloading the devices either using the command or by power the configuration was missing and I was presented with the following display:

So first thing to check is, am I using the correct command? I typed in the following and reloaded, sure enough the initial configuration dialog popped up again with no configuration loaded on the device.

Good new’s is that I wasn’t been stupid and no matter what command I tried the configuration after reload was simply blank, like you would expect when your first power on the router. The bad side was I was still no closer to getting my configuration actually saved on the device.

After doing a bit of searching I found some information on the “configuration register”, basically a pointer in the IOS that defines where the configuration will be loaded from. In my case this was set to “0x2142” which bypasses the startup-configuration, as you can see below by running the “show version” command

The solution is to correct the configuration register and set to “0x2102”, which can be done using the below commands. I would suggesting setting something like the hostname so it’s easy to see if this works, also you will need to reload for the command to take effect.

Before you reload you can confirm the changes by running the “sh ver” command again, you should see something like this on the last line of output: